The beauty of the mosaic is only overshadowed by its size.

Seven million mosaic stones, each less than one square centimeter, cover the floor of the main hall of Hisham’s Palace in Jericho, West Bank.
For years, this work of art remained hidden, but last month it was briefly uncovered ahead of being officially opened to the public.
The mosaic was first discovered in 1935 by Palestinian archaeologist Dimitri Baramki, and the British archaeologist Robert Hamilton — but had been buried under sand to protect it from erosion.
Following a three-month excavation process, the resurfaced stones bring to life stunning, nearly perfect geometric patterns, each intricately detailed in one of 38 floor sections. The patterns, in bright reds and pinks, radiate outward from the central mosaic — a floral design of interlocking triangles.
Staring at the mosaic, which covers nearly 9,688 square feet (900 square meters), it is impossible not to be impressed.
“I have visited the place so many times with family and with friends,” says local tourist Rania Fahoum. “I have never seen it so beautiful. The mosaic adds colors and beauty to the place and gave me the feeling that there is still much to discover in this historical palace.”
Eyad Hamdan, director general for the Palestinian Ministry of Tourism, in Jericho, says that the project was fundedhie mosaic is displayed to the public in early 2018.” 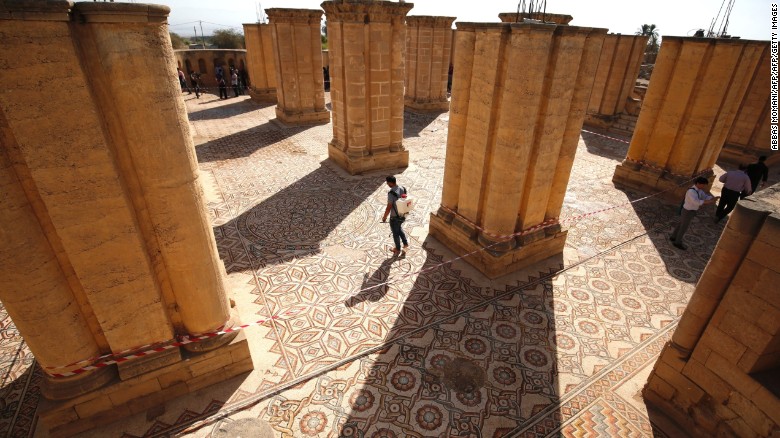 The mosaic covers the floor of Hisham’s Palace, built by Caliph Hisham bin Abed el-Malik in the mid-8th century AD. The site, sprawling over 150 acres (61 hectares) just north of the modern city of Jericho, was used as a winter resort until it was destroyed in an earthquake a few years after its completion.
The centerpiece of the palace was the Great Hall. The square two-story structure was held up by a series of columns, and it is here where the palace’s iconic symbol is located, perched in the middle of the hall’s remains: a massive stone star that has become the symbol of the city of Jericho.
But it is the bath house to the north that houses the beautiful mosaic. The different color stones were brought in from around the region — black from Nabi Musa, south of Jericho, red from Jerusalem, white from Hebron, pink from Bethlehem, and the list goes on.
Together, the stones form one seamless piece of art.

For decades, the mosaic sat under a layer of sand for protection. But with the mosaic’s unveiling, tourism to Hisham’s Palace has soared.
Eyad Hamdan says the number of tourists has increased considerably in the space of a month. A period between late September and October saw 1,000 tourists, a figure that was increased to 6,000 between late October and November.
Often a first stop for tourists crossing into the West Bank from Jordan via the Allenby Bridge, Hisham’s Palace has become even more popular with the mosaic’s uncovering.
“Hisham’s Palace is one of the most famous places visited by tourists in Palestine,” Hamdan tells CNN. “It’s so popular first because it is located in the lowest part of the world, and also because of the religious and historical value that it has.
“Now the mosaic added the artistic side that adds a lot of value to the place and attracts more tourists to come and visit.”
From afar, it is easy to think of the West Bank only in terms of conflict — Israelis and Palestinians at odds over contested land — but the region’s long history means it is replete with religious and cultural sites to visit. 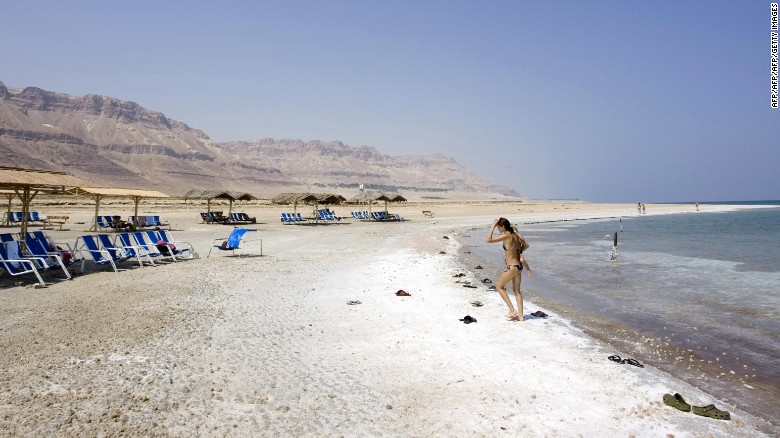 The village of Sebastia, just outside of Nablus, contains Samaritan ruins and Byzantine churches. Bethlehem has the Church of Nativity, built on the spot where Christians believe Jesus Christ was born. The biblical baptism site is just east of Jericho on the Jordan River.
Jericho itself is a tourist site. It is the lowest city on earth at nearly 850 feet (259 meters) below sea level. The Dead Sea, which is the lowest point on earth at 1,400 feet (427 meters) below sea level, is a short drive away.
It is also widely regarded as the oldest city in the world, with evidence of settlements dating back more than 10,000 years.

Jericho appears in both the Old and New Testament of the Christian Bible. In the Old Testament, it is the site of a battle between the Israelites, led by Joshua, and the Canaanites. According to the biblical story, the Israelites marched around the walled city seven times, causing the walls to collapse, though this story has little — if any — archaeological evidence to support it.
In the New Testament, Jesus Christ healed blind beggars as he passed through Jericho on his way to Jerusalem. A small but thriving Christian community speaks to the city’s ongoing religious significance.
Hisham’s Palace is one more part of this history, making Jericho a crossroads of Islam, Christianity, and Judaism in the West Bank.
Show More
Share
Facebook Twitter Google+ LinkedIn StumbleUpon Tumblr Pinterest Reddit VKontakte Odnoklassniki Pocket Share via Email Print

Bonsai masters The ancient secrets behind their centuries-old trees